Meet 25-year-old Bailey: Springhill Medical Center employee and rehab miracle. Bailey’s story is one of a fighter and one that the local community holds near and dear to their hearts. 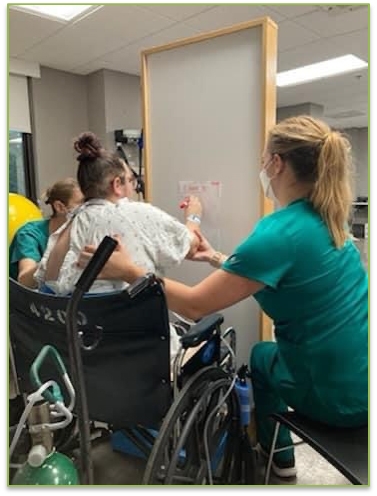 Bailey Sigler defied the odds and bravely fought to recover from a lengthy COVID-19 battle.

Bailey was admitted to Springhill's ER in August 2021 with progressively worsening COVID-19 symptoms including shortness of breath, cough and fever. Other than Type II Diabetes Mellitus, Bailey’s medical history was negative. Despite best efforts to avoid intubation, Bailey’s medical team had no other choice than to intubate her five days after being admitted. Bailey was moved to ICU with her mom at her bedside. Her Springhill family along with friends, relatives and the local community prayed for Bailey’s recovery. Local media visited Bailey, unbeknownst to her. Through the local media outlet, Bailey’s mom pleaded with the community to get vaccinated. As video of a sedated, intubated Bailey crossed the TV screens throughout the community, Bailey’s mom cried because she knew the odds were against her little girl.

The medical and nursing team refused to give up on Bailey though. Bailey was strong, perseverant and resilient. She was a fighter. Slowly but surely, Bailey began to show signs of improvement. She was weaned from the ventilator.  Chest tubes were removed. Bailey began working with physical therapy and was able to be transferred out of ICU to a patient room. Springhill Inpatient Rehab remained in Bailey’s corner, cheering in the background as she stabilized even more. After well over a month of fighting for her life, it was now time for Bailey to begin her rehab journey. Springhill Inpatient Rehab knew it would require 110% from all parties but were up for the challenge of showing Bailey how to live again. Bailey had come a long way, and now it was time for the Springhill Inpatient Rehab team to do their part in Bailey’s miraculous recovery.

On admission to rehab, Bailey still had her gastric tube and tracheostomy. Her oxygen levels and respiratory status remained fragile, requiring very close monitoring. Even the slightest movement caused desaturation. Bailey required total assistance for performing basic self-care and mobility, which was limited to only bed mobility. It took all of Bailey’s energy to complete the smallest of tasks. Foot drop and muscle wasting were obvious. Bailey was motivated to get back to living her life though. She had an incredibly strong support system including her mom (also a Springhill employee) who never left her side and a rehab team dedicated to helping her achieve her goals. Bailey made a little progress every day. At the end of her stay, Bailey surpassed her goals. She no longer had a tracheostomy or gastric tube. She was independent with bed mobility and set up for transfers. She was able to walk over 150 feet and climb 12 stairs with standby assistance. She was able to use her wheelchair independently. Bailey regained independence with eating and grooming, required set-up assistance for upper body dressing and putting on footwear, and needed minimal assistance for lower body dressing and showering.  After 28 days of rehabilitation, Bailey was able to go home to her family.

Bailey will always hold a special place in the hearts of our rehab team! Congratulations on your recovery, Bailey!!

SMC expanded the Inpatient Rehabilitation Unit from 11 to 18 all private rooms, which now makes the hospital a 270-bed Rehab Expansion

Sounding the Alarm on CO Poisoning

The donation of several carbon monoxide alarms (CO) is leading to safer families for our area. SMC's Center for Wound Alarm saves lives